The modernity of classification 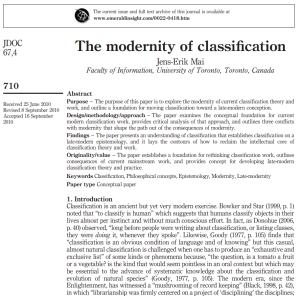 The modernity of classification

Classification is an ancient but yet very modern exercise. Bowker and Star (1999, p. 1) noted that “to classify is human” which suggests that humans classify objects in their lives almost per instinct and without much conscious effort. In fact, as Donohue (2006, p. 40) observed, “long before people were writing about classification, or listing classes, they were doing it, whenever they spoke”. Likewise, Goody (1977, p. 105) finds that “classification is an obvious condition of language and of knowing” but this casual, almost natural classification is challenged when one has to produce an “exhaustive and exclusive list” of some kinds or phenomena because, “the question, is a tomato a fruit or a vegetable? is the kind that would seem pointless in an oral context but which may be essential to the advance of systematic knowledge about the classification and evolution of natural species” (Goody, 1977, p. 105). The modern era, since the Enlightenment, has witnessed a “mushrooming of record keeping” (Black, 1998, p. 42), in which “librarianship was firmly centered on a project of ‘disciplining’ the disciplines; of classifying and cataloging the mushrooming recorded forms of knowledge in its various compartments” (Black, 2001, p. 68). The conceptual foundation of classification is closely tied to the scientific paradigm of the modern era, which seeks “the progressively better (more accurate, more complete, more parsimonious, more efficient) representation, explanation, and prediction of natural reality” (Gieryn, 1999, p. 343) and to establish “a great gap between objects and subjects” (Latour, 1991, p. 55-6) where scientists’ role is merely to translate the facts of nature; “the scientists declare that they themselves are not speaking; rather, facts speaks for themselves” (Latour, 1991, p. 29). Against this modern scientific paradigm has risen an understanding of the scientific enterprise in which “scientific facts can be shown to have interpretive flexibility” (Bijker et al., 2009, p. 2) that have informed much current thinking about science and is based on recent epistemological shifts throughout the scholarly and scientific enterprises. The foundation for thinking about and the practice of classification work is influenced by this modern scientific paradigm (Zerubavel, 1991, p. 69-70):

Traditionally obsessed with classifying, science has also inspired the evolution of many cultural “texts” – both scientific (the zoo, the botanical garden, the museum, the encyclopedia, the Dewey decimal system) and nonscientific (the supermarket, the department store, the restaurant menu, the Yellow Pages, the catalog, the stamp collection) – that embody the purist effort to force reality into mutually exclusive mental compartments (as well as promote decontextualization).

Much classification work is built on the notion that what is being classified exists independently of humans and that the work of classificationists and classifiers is to discover the real essences and represent the kinds and phenomena as they really are, to represent what documents are actually about. In opposition to this dominating view it could be argued that classification work involves some sort of “interpretive flexibility” in which the distance between what is classified (the object) and those who classify (the subject) is not kept at an artificial distance. This taken-for-granted modern scientific paradigm within folk theories of classification has carried over to information studies, in which decontextualization and neutral and objective classifications continue to be the norm and aim. Classification theory within information studies has long worked towards the one best system, as noted byMiksa (1998, p. 81), “somewhere, somehow, we can, or should try to, produce the one best classification system that will serve all purposes.” Both Szostak (2004) and Zins (2007) have recently undertaking massive projects to develop grand classifications of human experience and scientific effort. However, in the late-modern society where the diversity of human experience is becoming increasingly prevalent and it is accepted that any fact has multiple interpretations, and where pluralism flourishes, we need to rethink the conceptual foundation of classification work and theory and build a foundation that starts from an interpretive, pluralistic assumption. This paper traces and interrogates the shift from classification-as-ontology, in which everything is defined as it is, to a more contemporary notion of classification-as-epistemology, in which everything is interpreted as it could be – or more precisely, the paper argues for a conceptual move from modern monistic ontology to late-modern pluralistic epistemological foundation for classification theory and practice.